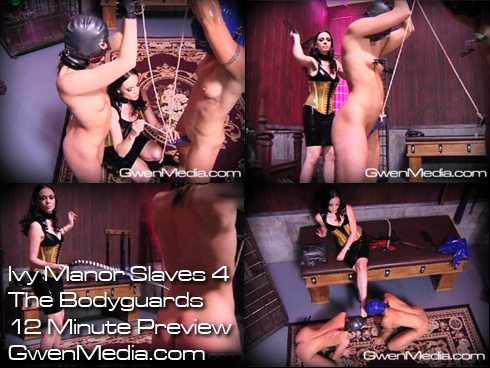 Can’t wait for GwenMedia’s follow-up to the AVN Award winning Ivy Manor 3? Now you don’t have to. This week’s member’s update features a portion of the soon to be released film, Ivy Manor Slaves 4 – The Bodyguards.

In this video, before Isabella is joined by a new pupil, Madison Young, she is found here disciplining her two slaves, Ariel X & Wenona for their naughty behavior. After placing the two in connected bondage, Isabella flogs, paddles and whips her slaves before allowing them to worship her feet.

What happens when Madison joins in on the fun? Well, you’ll just have to wait a bit longer for that. Be looking for Ivy Manor Slaves 4 – The Boduguards on DVD here soon at GwenMedia.com.